The Girls of Liberty Lodge 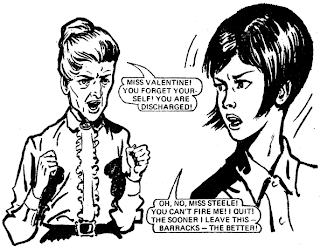 This strip also introduces us to that staple of girls' comics, the evil headmistress/teacher who will stop at nothing to get her way. The novel twist being that the evil headmistress is principal of an entirely different school. That school being Hardington Hall, where the story opens. It is a very strict school, where pupils who infringe the rules are put through a show trial in front of the entire school, with Miss Steele the headmistress playing judge and prosecution (defense counsel being superfluous to requirements). They are then locked up in the punishment room when they are inevitably found guilty.

Sally Valentine, a new, young teacher defies Miss Steele by visiting a girl in the punishment room, and when she is caught, speaks out against their cruel measures. She resigns before she can be fired, and takes the opportunity to start a different type of school that she's had in mind for years, bringing in her friend Miss Timmy as the only other permanent teacher we see at the school.[1] 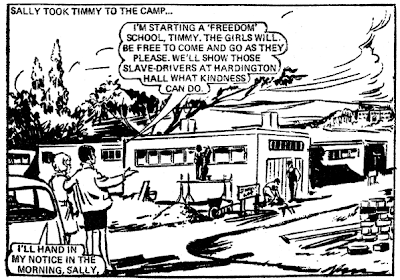 In fact the actual specifics of how Liberty Lodge works are not given. There's some vague talk about the pupils having a say in the running of the school, and being allowed to choose which lessons to attend, but it's a long time before we see any details of the philosophy in practice. There's never any hint of the girls taking any exams.

Miss Steele takes against Miss Valentine and Liberty Lodge with impressive monomania. It would be wrong to say that she falls back on illegal methods to shut down Liberty Lodge as a last resort, because that's her starting point: setting Miss Valentine up as a thief after having an accomplice buy a vase from Miss Valentine using money which she can then claim as stolen. When it gets out to the parents [2] that Miss Valentine has been arrested for theft, they all withdraw their girls from the new school, and it looks like Liberty Lodge is over before it's started.

Luckily for Miss Val [3], former Hardington student, ex-Liberty Lodge girl and now Hardington pupil again, Mary spots Foxley, the accomplice, coming to visit Miss Steele and... talk about the illegal things they got up to. And spend enough time doing it for Mary to phone Liberty lodge so Miss Val can rush over, sneak into the school, and still manage to catch them saying incriminating things to each other on tape. With the threat of going public she is able to get Miss Steele to drop criminal charges and tell everyone it was a mistake. All the girls come back to Liberty Lodge and Miss Val never thinks to use the threat again.

Miss Steele's next ploy[4] is to send her niece Sandra to Liberty Lodge as a pupil to sabotage the school. Sandra does play a few tricks; setting fire to the art hut, misdirecting the girls during a climb, and puncturing their tires at the start of a cycle race; but she is soon won over to the Liberty Lodge side and is forgiven all the criminal damage and putting girls' lives in danger.

Miss Steele takes a step back at this point, letting her pupils take the lead in the vendetta. There's a hockey match between the two schools where the Hardington team cheat outrageously, fouling the other side whenever they think the referee isn't looking, and a narrow boat race where, again, the school known for strict discipline cheats at every turn. The Liberty Lodge girls always win, of course, because they are friendly and kind, but mostly because they are incredibly lucky. For example, during the narrow boat race the Hardington girls switch signs, causing the Lodge girls to go the wrong way, except they meet some nice people who show them a shortcut.

Undeterred, Miss Steele hires Miss Pringle to pretend to be the supply teacher Miss Val brings in to substitute for her while she visits a sick aunt in Ireland. Miss Pringle has a faked letter from Miss Val, saying that she is to take over as headmistress. She then proceeds to institute all kinds of draconian policy changes that are the opposite of Miss Val's philosophy[5] in an effort to encourage the girls to leave the school. Instead, the girls rebel, standing up to Miss Pringle and refusing to go along with her rules. 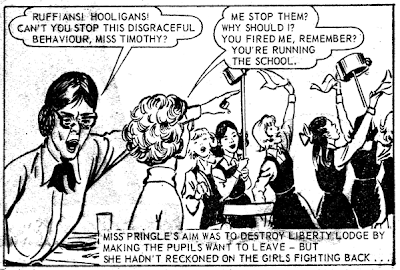 Miss Pringle is entirely incapable of dealing with pupils who think for themselves and refuse to obey unfair rules, which suggests that she is perhaps a former teacher at Hardington. Given her criminal behaviour, it's hard to see that anyone who didn't have some existing relationship with Miss Steele would be prepared to go to such lengths in pursuit of her one-sided feud. Unable to cope, she calls Miss Steele for help, and the deranged headmistress sends a group of senior prefects to join the school temporarily and act as Miss Pringle's enforcers.

But even this does not stop the Lodge girls, and it is only as Miss Pringle is preparing to flood them out that Miss Val turns up and all is set to rights.Once again Miss Val chooses not to bring a criminal prosecution against Miss Steele. After all these attacks on the school there's no reason to believe she would stop now, so Miss Val's failure to even threaten her with the police if she doesn't cut it out seems rather foolish.

After a short and pointless episode about an amnesiac heiress [6] we come to the final story, where the two schools have to participate in a series of competitions to win a prize. Hardington Hall cheats all the way through and wins, but it then turns out that an even bigger prize had been set aside for the school that behaved the best, which of course, goes to Liberty Lodge. 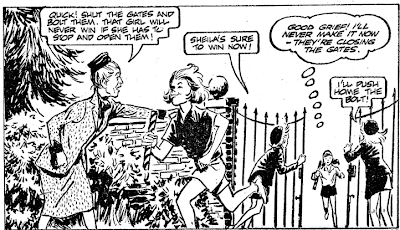 The Girls of Liberty Lodge is not one of Tammy's better stories. It has some interesting ideas, but they are never explored very far, and most of the individual storylines are a bit dull and predictable. Only two of the girls of Liberty Lodge regularly appear in the series, Mary and Sandra, and they are very much supporting roles to the teachers. Unlike Betina at Ballet School there's no larger plot or themes, it's just a series of incidents where the bad guys behave badly and the good guys behave well and win. And despite being a story about two schools, nobody ever learns any lessons. In the end the heroes do win, but the villains don't exactly lose. They just get a prize that's not quite as good.

Ultimately the most interesting thing about the series is how a school that has a fascistic level of discipline and adherence to rules can also promote cheating at every turn. One is left with the impression that Miss Steele's devotion to rules only extends as far as those she has personally introduced; any rules set by, for example, the organizers of competitions, or even the laws of the land, can be flouted if it serves her personal interests. 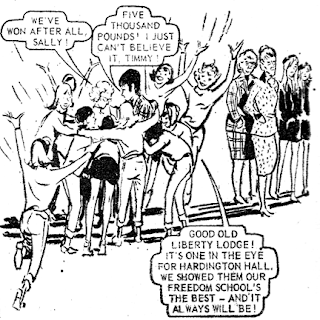 Notes.
1) Although it has a lot of temporary ones. And even the ones who aren't plants by Miss Steele have some kind of baggage.
2) Because Miss Steele phones them all up to tell them.
3)As she is known to her girls.
4) The only reason I can think of that anyone goes along with Miss Steele's increasingly bizarre and illegal behaviour is that they are so used to the strict discipline of Hardington Hall that nobody dares to question the headmistress' decisions.
5) And blatant copies of Hardington Hall policies, like the punishment room.
6) Tammy is full of stories about amnesiac heiresses. At one point it has three running simultaneously.
Posted by Marionette at 7:42 PM