No Tears for Molly 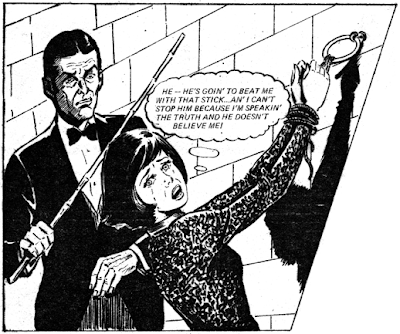 One of Tammy's two signature serials (the other being Bella), and the only feature in the opening line up to last more than thirty issues, No Tears for Molly [1] told the story of young servant girl [2] Molly Mills,
and her abusive relationship with Pickering the butler at Stanton Hall from 1926.

She arrives at the same time as her perennial nemesis, although a year later Pickering would be described as having worked there for "a couple of years", implying that his arrival had predated Molly.  They get off to a bad start [3], but it soon becomes evident that "nasty" is just Pickering's default setting, going well beyond anything reasonable in his punishments of those he is responsible for, though no one gets it as bad or as often as Molly. He regularly hits her, but more creative punishments include locking her in a pillory, tying her up in a deserted tower, forcing her to stay up all night working, and at one point locking her in a flooded dungeon. How he gets away with this behaviour is unclear, though the rest of the staff's limp acceptance of each new attack doesn't help. 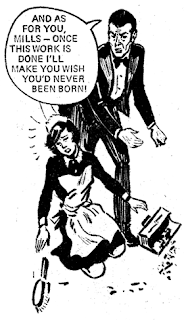 The format breaks down into a series of individual stories each running for several issues. They are episodic, but with no ongoing subplots or character arcs. Nobody is ever really changed by the dramatic events that occur and everything defaults back to the status quo at the conclusion of each story. To the point where characters even seem to forget events that happened in previous episodes.[4] This is not to say that there's no carry-over. A character who comes to visit in one story may well return at a later date, and the previous episode may even be referenced, but nothing substantially changes.

As far as I've read, anyway, so feel free to correct me in the comments (but don't give away too much. The story may be forty years old but it still counts as spoilers to me). There remains a lot I have yet to see, but a glance at an issue from 1981 finds essentially the same cast looking much the same age, and although the date does seem to move forward in real time, nothing really seems to have changed in ten years. 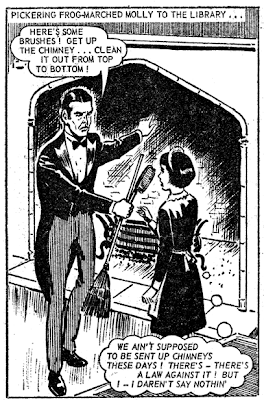 Interestingly, Molly isn't quite the complete innocent, unjustly tormented, like many Tammy protagonists. Of course Pickering's bullying is so far beyond reasonable reaction as to be clearly over the line into criminal abuse, but Molly so regularly disobeys explicit instructions, often for little substantial reason, that it's only because the narrative supports her as the One Whose Heart is in the Right Place and arranges for her sometimes thoughtless actions to turn out to be the right thing to do, that gives her any moral high ground.

For example, one story [5] has Molly going ghost hunting in the unused east wing of Stanton Hall despite it being categorically stated from the start that it's an out of bounds area, and a firing offence if she was caught there. She has no excuse; no cause. She just goes there because she's curious, after finding a secret passage that leads there . In fact she is spotted by Betty and Kitty, who see her at a distance, mistaking her for the rumoured ghost, which then gets wildly exaggerated in the retelling, precipitating subsequent events of the story.

No such ambiguity with Pickering. He's always mean, always nasty, and always in the wrong. He's also a complete coward, crumbling at the merest suggestion of threat toward him. Which somehow none of his victims ever think of exploiting. 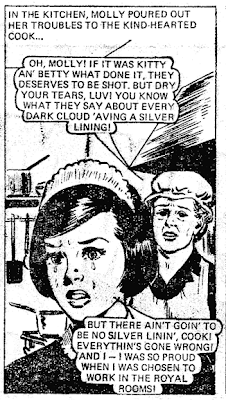 Other members of the cast downstairs include Molly's two friends among the staff, Cook (is she ever given an actual name?), and Charlie the boot boy, plus two petty and spiteful servant girls, Betty and Veronica Kitty who often seem to be oblivious to the story in progress, and serve only to provide extra obstacles for Molly, like the time they push her in the fountain for a laugh when she's in the middle of trying to save someone's life. Upstairs there are Lord and Lady Stanton, and their wheelchair-bound daughter Mistress Clare (also a friend to Molly, often supporting her against Pickering), but the Stantons disappear from the narrative for long stretches. They also seem to have an inordinate number of guests, as many stories will revolve around people who are visiting the hall, even though their hosts are often nowhere to be seen. Other staff appear as individual stories require, and then vanish again afterwards, sometimes never to be seen again.

Originally I thought that the series had been inspired by the popular period drama Upstairs Downstairs, but a little research finds that while both débuted in 1971, the comic strip predates the TV show by six months. It's a topic that seems to be a perennial favourite, with Downton Abbey being the latest drama to focus on what goes on among the servants in a great house as much as it does with the owners. Tammy, being Tammy, is more interested in the working class domestic staff than the upper class family. 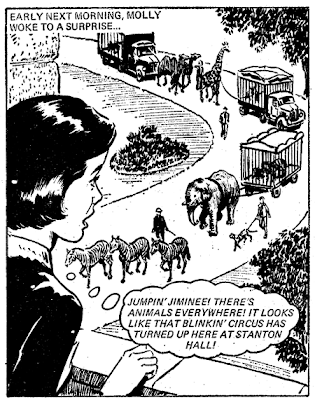 The writing, by Maureen Spurgeon can be entertaining, often finding creative ways of bringing the most unlikely characters and situations to Stanton Hall, but this seems an effort to cover the lack of any real knowledge about how domestic service actually worked, and the complete lack of any depth or development in the regular characters, which makes anything character related repetitive and irritating after a while, and the amount of violence routinely directed toward Molly is disturbing.

The art by Tony Thewenetti isn't as slick as Jean Sidobre; it doesn't have the emotional depth of Dudley Wynne or the attention to detail of Giorgio Letterati, but it works for this strip. Molly herself is depicted as young and vulnerable, while Pickering has a permanent frown. There's clearly no lack of research in the art, as everything Thewenetti is asked to show is portrayed in realistic detail, from gypsy caravans to circuses to zoo animals. His main fault is that he's not great at showing movement. Whenever somebody is supposed to be running it looks a little stilted, and he uses the same bent leg pose all the time. He stays with the strip until 1977. I don't think the artist who follows him is anything like as good a fit, but we'll get to that another time. 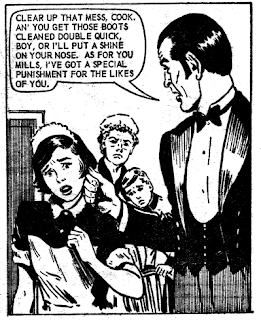 Notes:
1) Later shortened to Molly Mills, with individual story titles, perhaps because somebody pointed out the original title was so inaccurate; barely an episode would go by without Molly bursting into tears
2)Her job title is never specified, even though the hierarchy of domestic service of the period was rigidly defined. She's certainly some kind of maid; the variety of work she is seen doing most often suggests chamber maid, though the vagueness about anything job-related in the primary cast makes it easy to infer that despite writing it for ten years the writer never got around to doing the research.
3) Molly's fault for not looking where she's going and knocking his suitcase off the platform where it immediately gets run over by a train.
4) In the issue dated  1 July 1972 Molly states that it's the first time she has seen a circus, forgetting that she went to one a year earlier in the 17 July 1971 issue. It must be all those blows to the head causing her memory loss.
5) Begins in issue dated 18 March 1972.
Posted by Marionette at 7:00 AM