Tammy is often described as the home of "Cinderella" or "rags to riches" stories, where a girl overcomes difficult circumstances to reach her happy ending through some talent she possesses, but it's more complex than that. A lot of the time, the best she could hope for was escaping the current intolerable situation she's stuck in.

Editor Gerry Finley-Day set the style in the first issue with Slaves of "War Orphan Farm". Set during World War Two, before the story has even opened Kate's parents have been killed in the London blitz, and things only go downhill for her from there as she is evacuated to a farm in the Lake District. 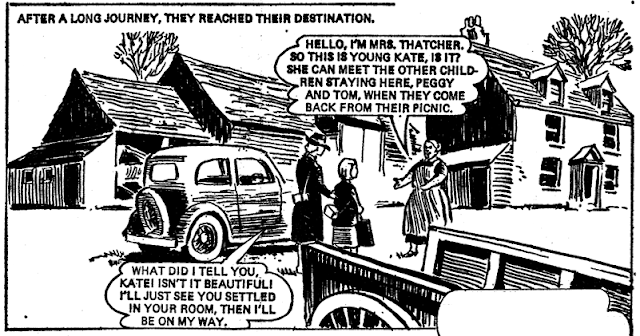 The owner of the farm is called Ma Thatcher. Almost certainly named for the Prime Minister, although in 1971 she was best known as "Thatcher, Thatcher, milk snatcher" while Secretary of Education, for enacting cuts to free milk given to children.

As soon as her escort leaves, Ma Thatcher takes Kate's belongings and leaves her in a barn with several other children. It's all a scam to not only get money out of the government for the upkeep of the children, but to hire them out as slave labour to local farms, or have them rock breaking in a quarry.

As time goes on more children are brought to the farm. One of them, Bonnie Sykes betrays Kate to make a deal with Ma to become part of her gang, overseeing the other children. But Kate repeatedly stands up to Ma, which results in her being singled out for extra punishment, like being locked up in an animal cage all night in the rain, or being forced to stand perfectly still for hours with vicious guard dogs surrounding her that will attack if she moves. 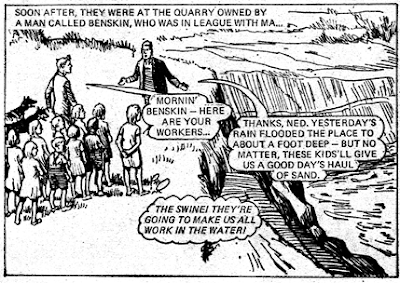 It always struck me as odd that none of the other farmers in the area seem at all bothered about this child slavery, and are even complicit, bringing the children back to Ma when they escape, or paying for them to work their fields. And no rumour of the mistreatment ever gets out. In fact the only person who takes against this is the mysterious Mad Emma, the mere mention of whom seems to frighten Ma Thatcher.

Emma keeps her face hidden, adding to her mystery, but we find out little about her other than that she is living in an abandoned village that's been evacuated for no obvious reason. It's a tiny village in the middle of the Lake District, hundreds of miles from any strategic target. This is, after all, the reason the kids have been evacuated to the area. This is never explained.

The poor put-upon children seem oddly gullible. When, all of a sudden, Ma starts treating the kids nicely they refuse to have anything to do with Emma, suggesting that she's trying to spoil their now happy family. Of course it's all a ruse. Evacuation inspectors are coming to the farm, so Ma needs to give the impression that all is well. Even Kate is largely fooled, though still suspicious. By the time she finds out what's really going on it's inevitably too late. Until it's time for the story to end, all attempts to upset the status quo are doomed to last second reversals. It wouldn't be tragic otherwise.

As time goes on Kate helps Emma rescue one of the children here and there until it eventually reaches the point where Ma decides Kate is too much of a liability to keep alive.

After avoiding a couple of 'accidents' set up by Ma's henchman, Benskin, Kate escapes with Emma and they plan how to liberate the rest of the children. Since we are now reaching the end of the series, Emma reveals the mysterious past that has not so much been a subplot so much as a thing mentioned a couple of times and then forgotten until now. It seems that Emma is the true owner of the farm, but Ma Thatcher had wanted it, so she started a fire, but Emma escaped, horribly burned, and wandered in a state of shock until she came to the abandoned village where she set up home. 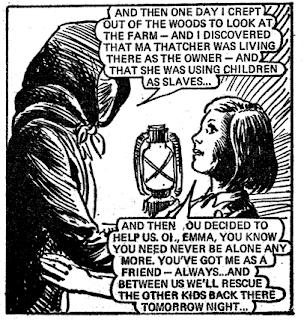 So it seems that the neighbourhood farmers are not only prepared to employ child slaves, but they were also entirely uninterested in the farm suddenly being taken over by a stranger, with the true owner apparently dead in a mystery fire.

Meanwhile, back at the farm Ma has received a letter informing them that with the danger of bombing letting up, the children are to be relocated back in the city. It's only at this point that it occurs to Ma that if any of the children leave they are liable to tell the authorities about her cruel practices. Falling back on her old standby, she plots to lock the children in the barn and then burn it down. 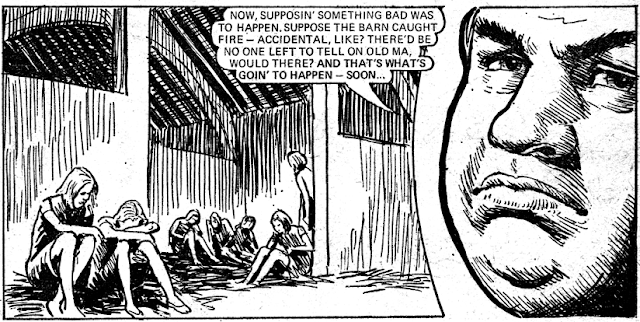 This is too much for Bonnie, and she runs off, almost tripping over Kate and Emma on their way in. She begs forgiveness and then allows Ma to see her when she comes out to see where she's got to, covering for Kate and Emma. Emma and Kate dig a tunnel into the barn and help all the children escape through it. Ma almost shoots Kate as she makes her escape but Bonnie knocks her arm away, causing her to miss, before following Kate into the woods.

With all the children freed, Emma decides it is now time to call in the police, which she couldn't do before because of... um, reasons. But after waiting several hours and no sign of any activity, Kate goes to look for her and runs right into Ma Thatcher.

Ma has captured Emma and Bonnie, and locks Bonnie and Kate in the barn and sets fire to it, keeping Emma back to make her tell where the other children are. But Emma makes a break for it, rushing into the burning barn to rescue Kate and Bonnie. They escape, but when Kate hears Ma crying for help, she goes back in to bring her out. Ma inevitably then tries to kill her, but is prevented at the last second by a policeman, who the children managed to find on their own.

Ma is brought to justice, and the children are all allowed to stay on the farm with Emma, and everyone is happy (except Ma).

It's an original story, and certainly delivers on the emotive title, setting a style for which Tammy would become famous, and it has an exciting climax. But it has a lot of middle that doesn't develop the plot so much as reiterate the established situation until it's time for the conclusion. The plot itself has holes you could fly an airship through, and I'm wondering if the writer would have got away with them if he hadn't also been the editor.

The art, by Desmond Walduck, has a roughness to it that complements the story very well, while still being very clear, with not a mark wasted. It's not particularly inventive or decorative, but to attempt that with this story would work against the atmosphere. 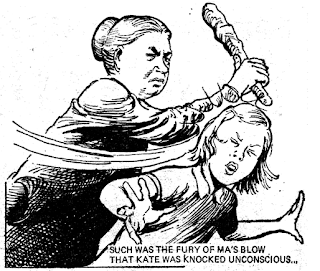 The violence against the children is explicit and on screen, in a way that I doubt would be seen today. While there's never any blood, Kate is repeatedly hit; several times she's bludgeoned into unconsciousness; and that's when she's not being subjected to hard labour in a flooded quarry, but she seems to bounce back very quickly. It's not quite glamorised violence, but it does seem largely consequence-free. The only time someone is seriously hurt, it's when one girl gets her leg caught in an animal trap set out by one of the baddies. Lethal violence is threatened several times, but never actually delivered.

All in all, Slaves of "War Orphan Farm" introduces many tropes that would be Tammy's signature: the working class heroine, the tragic efforts to escape fate (with hopes always dashed at the last second), the overt violence against girls, usually from a spiteful older female authority figure. Even enslaved groups of girls are something we will return to before long.
Posted by Marionette at 10:34 AM